Are you considering working abroad your goal this 2018? Before getting all your requirements done, take a look at the highest-paying jobs and salary report for Overseas Filipino Workers last 2017.

The data shows that land-based and sea-based engineers, healthcare professionals, and information technology (IT) were the highest-paying specialization for Filipinos overseas.

The highest paying specializations for Middle East are healthcare professionals such as pediatricians, general doctors, veterinarians and nurses with a salary range of Php54,000-Php86,000.

Meanwhile, a ship master in the United States could earn as much as Php99,000 a month; a chief engineer could earn Php96,000/month, and chief officer Php92,000/month.

Land-based engineers in Middle East could earn a monthly salary of 57,000 while those in Asia Pacific could earn Php59,000 monthly.

Countries in Middle East remain on the top list of locations for deployment. Most OFWs are deployed to Saudi Arabia, Qatar, United Arab Emirates, Kuwait, Bahrain and Oman.

Australia and Brunei were eliminated from the list, replaced by Malaysia and Taiwan. 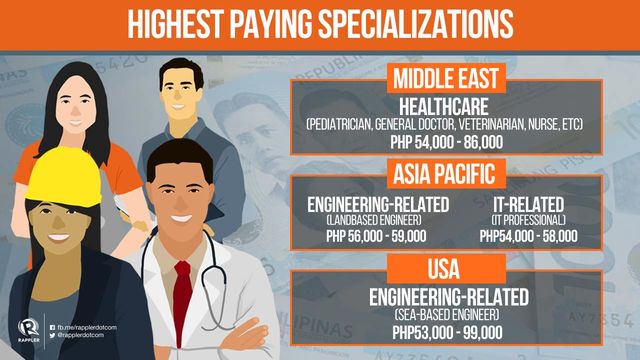 Last year, skilled workers were still the most in demand for work abroad.  Drivers, electricians, plumbing, maintenance technicians, etc. considered as general work are in demand in the Middle East. Engineers and workers for the food service industry were also on the top list.

The United States saw an increase in demand for sea-based engineers, and skilled workers such as electricians, fitters, able seamen, cooks, waiters/waitresses and stewards.

Thus, if you plan to work abroad this year, this data would give you pretty much what to expect for your salary range. It will also help you to search for jobs in the right country.